HOW CHIROPRACTIC HAS HELPED:

“My 15 month old son, Brennan, had chronic ear infections from the time he was six months old,until I started taking him to see Dr. Nicole. He was at the doctor’s office at least once or twice a month, and was put on antibiotics every time. He would be fine when he was on the medicine, but as soon as it ran its course, he had the infection again. The doctor put him on every antibiotic and ear drop there is. He also gave him an injection for the infections. When none of those worked, he sent us to a specialist to see about having tubes put in his ears. He had the tubes put in, and was fine for about a month and then the infections returned.

“During the time that he had these infections his motor skills were not developing as they should have been. He took much longer than the other children his age to start sitting up on his own and to begin crawling. When he finally did start to crawl, he was very slow and unsteady. When the other children in his day care class started walking, he was just beginning to stand on his own, and cruise around the furniture. I was beginning to think that he was developmentally disabled. I thought he would never learn to walk. Brennan finally started walking when he was thirteen months old, about one or two months behind the other children. When he did walk, he was very unstable and fell a lot. He would barely pick up his feet or bend his knees, and had to hold onto something to turn and look at me.

“My father told me that Dr. Nicole may be able to help Brennan in all of these areas. So I decided to take him in for a computerized spinal scan and see what, if anything, she could do for him. We went for the scan and found out that his spine was way out of alignment. Dr. Nicole said that the problems with his ears and walking were probably caused by his spine being misaligned. So we started his treatment.

“My poor child had been living with the pain of ear infections for most of his short life because I didn’t take him to see Dr. Nicole sooner. I feel that if I had started taking him after the first few ear infections, he would have never had to be on all of the medicines, or have surgery at such a young age. I would recommend anyone who has children with any kind of long term ailment to bring their children to Dr. Nicole, a Peoria chiropractor. My son could have lost his hearing if it weren’t for his treatment with Dr. Nicole.” 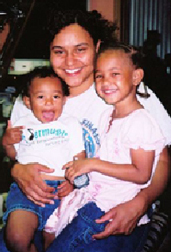