“I first encountered Dr. Nicole when I was 7 months pregnant. I had unbearable pain in my lower back from carrying the baby. The pain was so bad that the only relief I could find was lying on my back on the floor until the pain subsided. After seeing Dr. Nicole for a week, I felt stronger and my back pain lessened. After about a month of treatment, I finally felt no more pain.

“As my body progressed through the pregnancy, I maintained regular appointments. Finally, I went into labor. I truly felt the labor went so quickly because of my doula’s support, and the work Dr. Nicole had done to prepare my body for the delivery.

“Ten hours later I had a beautiful baby boy – Michael. After 24 hrs, the hospital staff had noticed that Michael′s breathing was labored due to congestion from the fluid not fully expelling during delivery, and he had not had a bowel movement. They informed me that if he did not soon, they would have to supplement him. I am adamant about breast feeding and did not like this idea.

“After speaking to Dr. Nicole, she agreed to come and see Michael. After some analysis, she adjusted Michael, not more than 2 hours later, his diaper exploded, and his lungs were clear, as a bell.

“Michael and I still see Dr. Nicole. I go for support from the stress that pregnancy took on my body.  Michael goes for support during his growth development. I do have to say that Michael has not been sick once and has no bowel trouble, vomiting/spit up, or colic.

“My pediatrician asked me what my secret was, and I told him – my chiropractor Dr. Nicole. He laughed, seems his kids see a chiropractor as well. Every mother wants to give their child the best possible chance to be healthy. Through chiropractic and Dr. Nicole, and Peoria chiropractic, I believe I am.” 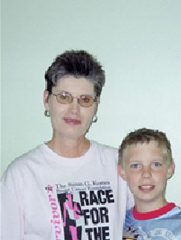